Yep, it’s time to talk about The Wage Gap.

But first, let me offer a few disclaimers:

1) For the longest time I did not consider myself a feminist, not having fully grasped the various nuances of that term. Even today I do not like to identify myself as such, based on personal experience with women who label themselves that way — I have encountered several women who I think take their feminism “too far.” I do now consider myself feminist, but only in the sense that I expect men and women to have equal opportunities to obtain jobs, get an education and play sports at the professional level, for example. I expect not to be paid less than a male co-worker or asked (verbally or otherwise) to dress or behave a certain way solely on the basis of my gender. I guess that makes me feminist.

2) I will cite my own personal experiences with sexism in the workplace only to illustrate my point(s), not to incriminate any individuals or organizations in such a way that engenders any kind of violence toward them, should the reader be able to identify anyone I reference based on special knowledge. What happened is in the past, and my goal is simply to encourage other women entering the workforce in my community to be aware of what sexism may still exist there and be encouraged to stand up for themselves.

So, without further ado, let's get to the heart of the matter.

In my last job, I had a manager — the guy who signed my time sheets — and a supervisor — the manager's boss, who also had final say on all our salaries (other than that, I was always a little uncertain of what he actually did for the organization).

I had three different managers and two different supervisors in the time I worked there. When I started, I was fresh out of college and excited about my first "big kid" job. I was living with my parents, rent-free, so it felt like I was making bank at $15/hr.

Five or six months later, a co-worker that started at the same time as me, but had a few more years of experience in the field, asked my then-manager about a raise he had allegedly been promised (I hadn't received any such promise, or even a job offer in writing; I just started working and started getting paychecks two weeks later). He asked this while I was in the room, which I sensed was a social faux pas, and later found out it was.*

Since I had been present for the request, my manager — a woman — said she would "try" to get me a raise as well; that should've been my first clue that the balance of power was out of whack.

Shortly thereafter, both my co-worker and I did receive raises. Mine was $1 more an hour.  His raise, I later found out, was $1.50/hr.

"Later" was in the spring of 2016, a little more than a year after our first raise. Management had changed and was continuing to change, and my co-worker was talking about leaving. I was producing more for the organization at that point, and felt like I had gained enough experience to warrant another raise, so I asked him how much he was making. I felt like our skills and qualifications were equivalent, at that point. He told me he made $17.50/hr, meaning he had been making more than me since the beginning. Not a huge deal, I thought — he started with "more experience," and I can still ask for another raise.

I posed this to Manager No. 2, who I still maintain a professional relationship with, and though he was supportive, he also expressed doubt that the new supervisor would go for it. So I held off. Eventually though, I said to myself, it was time. I sent an email to the supervisor directly requesting a meeting, which took place a couple days later. I explained to him why I thought I deserved a raise, including the fact that my coworker seemed to be paid more than me for doing the same thing. *This is when I was told, by the supervisor, that my coworker and I should not have talked about this. I told him I didn't know, nor did I really understand the gag rule (though it wasn't my first encounter with such a policy in the workplace). I don't remember his explanation, but I don't remember it being sufficient.

In any case, he agreed to raise me $1/hr, which seemed reasonable to me (though I don't recall if that was my own suggestion or his).

All was good. Then, he added a caveat, to the effect of, "if you come in here again in six months asking for another raise...," plus a facial expression that clearly conveyed "you're not getting another one."

In the moment, it rolled off me. I said something like, 'no problem, wasn't planning to,' and went back to my desk. But at the end of the day, I was still mulling over that interaction, feeling a little sick about it. From that point on, I started to see my interactions with him — including past interactions — as more and more sexist. For example, when we first met, and I told him my background and what I like about my job, I think, stuff like that. He responded with something like, "you're a little spitfire, aren't you?" I don't remember if other employees were present or not, but I remember feeling a little awkward about it, like, what? You've known me for two minutes and all I did was describe my work, essentially. How does that make me a spitfire, someone urban dictionary describes as "wild & free, that can say what he/she wants to say without a care in the world...Also, someone whose angry words sting like fire...Someone who you don't want to be on the bad side of?" I've never felt that accurately described me, and certainly not in the context of the office. I can be stubborn, sure, and if you're a jerk to me, I may hold a bit of a grudge if you continue to be a jerk to me. But I choose my words carefully, especially in professional arenas, and I like to give people second chances.

I was also slightly taken aback, though, at the structure of the question: "you're ___, aren't you?" How does one respond to that?? And, "little?" I don't think I have to explain why that was condescending. Yes I am half your age and not tall, but really?

That was the beginning of the end. Manager No. 2 left two weeks after Supervisor No. 2 arrived, and the co-worker I've mentioned left about a month later, I think. I left five months after that.


For those of you reading this, especially men, you may not see the sexism in this story as readily as I do. It is subtle, to be sure, but it is there, and it is a problem that pervades more of this country than I ever realized.


In Educational Philosophy, we're reading a book called American Education by Joel Spring. In it are revealed some shocking statistics on the difference between men's and women's annual wages, corresponding to different levels of education. For those with professional degrees, the difference is $60,000 a year — the difference. 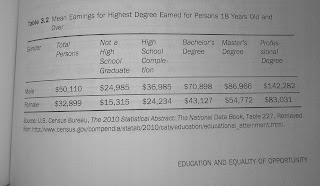 So, here are my questions, considering the arguments that the potential need for maternity leave (unplanned or otherwise) and work/in-field experience may also affect a woman's pay:

I'm sure there is more to be said on this topic, which I probably should flesh out. But if you would like to comment on this story/discussion, please do so; perhaps that will help me better express my ideas in the future, if what I have said here does not seem to accurately reflect The State of Things. 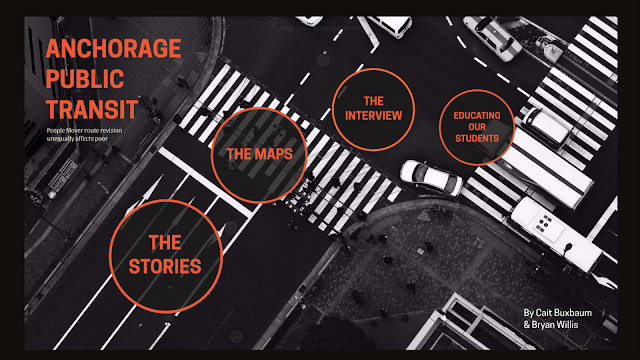